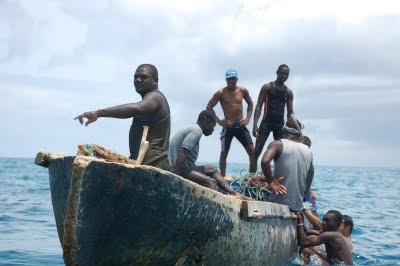 Today I was on the beach of Gamboa – 10 minutes from the center of São Tomé. There were kids and grownups, but also dogs and pigs. I had never seen a pig taking a swim, but here was one that was taking a bath in the sea. Apart from the pig, there were also fishermen on the sea.

Fishing in Sao Tome and Principe is artisanal. This means fishermen go out to sea several times throughout the day – at night, daybreak, or early morning.

Each boat in the water carries between six and 12 fishermen. Today they were heading for the vicinity of the Goat Island, Ilhéu das Cabras. One of the men was chosen to dive and identify the fish schools. Then he returned to the surface to tell his companions. 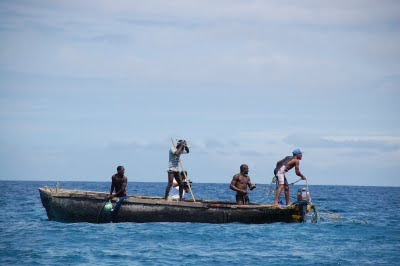 The excitement was great. The navigator fired the engine and began to circulate around the school, while the other fishermen threw the net overboard. After surrounding the fish school, the net was lifted. Sometimes you get a lot of fish. This time nothing.

Fishermen complained about the lack of government support. I wondered why not create a cooperative. They said it is difficult, they need help, and the government does not do what it should. One of them showed an interest in the idea of the cooperative. After five minutes of conversation I devised an entire project – quality fish for export.

I said they should look for a man they trust, someone who can take the project forward. They asked how to set up a cooperative? I spoke about the Marapa nonprofit which works behind the Embassy of Brazil in Sao Tome, and teaches fish traders to make money with fish parts that used to be thrown in the trash. 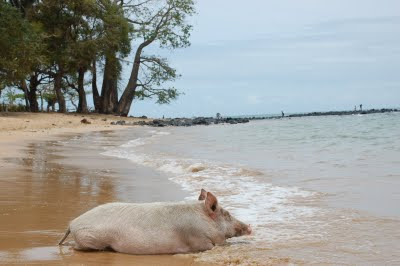 The fishermen are inscribed in the course and are given lessons by nutritionists. They learn to make fish sausage, fish pudding. Products from the head, tail and other shares of fish that were previously thrown away. Products with added value. More money in their pocket.

I told this story to the fishermen. I suggested they show up at Marapa, and ask for help. I imagined the creation of a brand in they style of – “fish selected from the warm waters of Praia da Gamboa of Sao Tome and Principe”. I imagined an entire transport scheme, with fish supplying European and American markets.

Fishermen looked at me with that unmistakable look, reserved for another crazy white man come to solve the problems of Sao Tome. I left. And the life of fishermen continued as before, in the waters of the Sao Tome and Principe.

Carlos Alberto Jr. is a journalist for TV Brasil, and in the past years has visited and written about 15 African countries. This story was first published in September 2009 in the Diary of Africa (Diario da Africa).

This entry was posted on Wednesday, March 3rd, 2010 at 11:15 am and is filed under Environment. You can follow any comments to this entry through the RSS feed. You can leave a comment, or trackback from your own site.